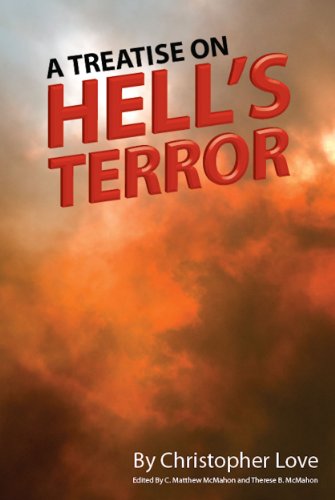 A 17th Century Puritan, Love’s writing on hell is bold, biblical and Edwardsian. Hard-hitting, but very good. Co-authors are the McMahon's.

It would be well for the damned if the body and soul in that sense should be destroyed so as to be annihilated. And the reason why both body and soul are mentioned is because the body has been partner with the soul in sin and, therefore, it shall share with it in punishment.

Therefore it is clear to every eye that the gospel is more backed with terror, and with the doctrines of hell and damnation, than the law ever was.

Now, it is God’s will that you should more fear sin than hell. As Anselm well said, “If hell were on one side, and sin on the other, you should more fear going into sin than into hell.” If man should find this place and hear the shrieking of the damned, and see the torments prepared for sinners, they would be more fearful of the place than sin that leads there. Therefore God, to prevent this also, conceals it.

This use Chrysostom makes of this point: if a man’s house were on fire, he would not inquire how it started, but how to quench it.

First, the wicked in hell have this loss. They are deprived of and banished from the favorable presence of God. And here Chrysostom said, “If there were a thousand worlds, the loss of the favor of one God is more than a thousand worlds.” It is the greatest torment of a damned man that he is without God. The presence of God makes heaven to be heaven. The absence of God makes hell more hell than it is. “Depart from me, you cursed.” This is the great torment of the damned, that they must depart from God and Jesus Christ forever.

Second, wicked men will sin to all eternity; therefore their torments must be eternal. As long as there is sin in a man, the Lord will torment that man; for sin and punishment cannot be severed. Sin is like oil and God’s wrath like fire. As long as you cast oil on the fire, the fire cannot cease burning. As long as sin is in a man’s nature, a man cannot be free from suffering.

I have read in Virgil, a heathen poet, that he speaks of one Tytius who had a vulture every day gnawing in his liver; and in the night it was repaired and made up again that the vulture might feed on the liver next day. And this they made a resemblance of hell and the gnawing of conscience there. This vulture, your conscience, shall eat out your peace and torment you with the thoughts of terror, and this you shall have until time is no more. Now, put all these together: the God, the prison, the fire, and the worm eternal.

You know when friends part, though it is but for awhile, their very parting provokes tears; but if they part never to see each other on earth, what floods of sorrow does their parting cause? When you are dying, you are departing not for a time but forever. You bid them farewell, never to see them anymore, never

You know in the same act, the punishment is greatened or lessened according to the person against whom the act is done. If you give a blow to an ordinary man, this may only amount to some petty suit and some small fine to be paid; but if you give a blow to a prince, you may endure the rack or imprisonment for life, because the person is eminent against whom you offend.

3. Should man live forever, he would sin forever. And therefore, God seeing this disposition in man. He may justly damn man forever, though he sins but for a time.

Pliny, in one of his writings, said that nothing in the world will so soon quench fire as salt and blood, and therefore, in many countries, where they can get plenty of blood they will use salt and blood rather than water to quench their fire. If you cast blood on it, it will dampen it in a moment. Beloved, I only mention this for this end, that though there is fire in hell, yet get Christ’s blood, and I can assure you that it shall never consume you!

I have read a story of a young virgin who, being tempted by a lustful young man to the act of uncleanness (he being very earnest with her to commit that foul act), she gave him this answer, “If you will grant me one thing I desire, I will then satisfy your demand.” He told her he would. “Then,” said she, “I desire you would put your finger for a whole hour to burn in this candle.” “O” said the man, “that is unreasonable what you ask of me!” “It is true,” said she, “it is; but you ask me a request more unreasonable, to satisfy you in a thing for which I shall not only burn an hour, but burn forever in the unquenchable fire of hell.”