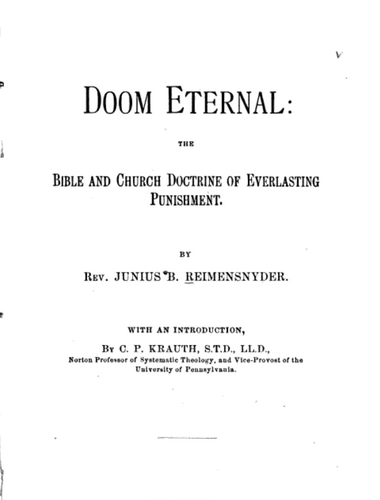 One of the most comprehensive works on hell ever produced with major sections on the church fathers, the creeds, and exegetical and grammatical proofs of the eternality of hell.

175
When , therefore , our blessed Lord , piercing with his infinite glance to the utmost bounds of the hidden future , and summoning its everlasting scope within his vision , deliberately declared that Judas , who was to travel all along its endless course , would better never have been born , he meant that the furthest deeps of futurity contained no succeeding crown of bliss that was to balance his foregoing burden of misery , and accordingly that his punishment was to be unremitting .

198
But if the Scriptures put them into hell , and by not the remotest intimation take them out again , we have no other recourse than to leave them where the infallible Word of God leaves them , viz . , “ to dwell with everlasting burnings ” ( Isa . xxxiii . 14 ) .
209
The “ destruction , ” then , of the Bible is not annihilation of existence , but of blessedness . It is not the extinction of being , but of happiness . It is not the end of life , but of hope . It is perishing not in a natural or physical , but in a spiritual sense . It is “ that state of separation from God in which all the higher faculties of human nature are working falsely and discordantly ; in which the true end of being is discarded , and its true enjoyment lost ; and in which there is , at last , the complete extinction , not of the soul's being , but of its well being . ”
319
It is not then the mere outposts but the very citadel of faith itself which is the real object of these covert efforts . Yielding a little to the enemy , soon the innermost sanctuary will be broken into and desecrated . If today we abandon what may seem indifferent , tomorrow we will be summoned to surrender the very fundamentals .
330
Well , then , there was no eternal death for Christ to die for . If infinite love must render impossible such an everlasting condemnation to woe , why did not Christ let that necessary bar stand in the way be tween men and perdition , instead of coming himself and exposing his own infinitely precious soul and body to the stroke of Almighty wrath , until a cry of nameless agony was wrenched from his lips , and the very heavens grew black with appalling horror at his infinite woe ?
Tagged 19th Century.