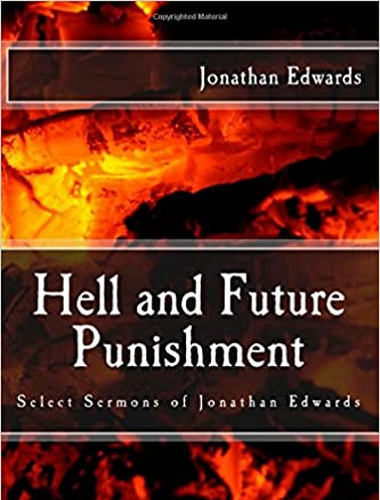 Edwards is unarguably the greatest theologian of hell (and possibly heaven as well!) In his sermons there is incredible biblical depth and, usually, unassailable logic. This book is merely representative, as many of his sermons are widely available online. "Wicked Men Useful in Their Destruction Only" is unique and particularly recommended. Modern readers may find him pointed, but is he more pointed than scripture?

From "Sinners in the Hands of an Angry God"

The wrath of God burns against them, their damnation don’t slumber, the pit is prepared, the fire is made ready, the furnace is now hot, ready to receive them, the flames do now rage and glow. The glittering sword is whet, and held over them, and the pit hath opened her mouth under them.

So that thus it is, that natural men are held in the hand of God over the pit of hell; they have deserved the fiery pit, and are already sentenced to it; and God is dreadfully provoked, his anger is as great towards them as to those that are actually suffering the executions of the fierceness of his wrath in hell, and they have done nothing in the least to appease or abate that anger, neither is God in the least bound by any promise to hold ‘em up one moment; the devil is waiting for them, hell is gaping for them, the flames gather and flash about them, and would fain lay hold on them, and swallow them up; the fire pent up in their own hearts is struggling to break out; and they have no interest in any mediator, there are no means within reach that can be any security to them. In short, they have no refuge, nothing to take hold of, all that preserves them every moment is the mere arbitrary will, and uncovenanted unobliged forbearance of an incensed God.

From "Wicked Men Useful in Their Destruction Only"

It would also be a disparagement to his justice; for this is a world where, “all things come alike to all, and there is one event to the righteous and to the wicked.” If there were no other state but this for wicked men to be in, justice could not possibly take place. It would also reflect upon the holiness of God. Forever to uphold this world for an habitation of such persons, and forever to continue the communications of his bounty and goodness to them, would appear as though he were disposed to countenance and encourage sin and wickedness.

When they shall see the misery of the damned, it will give them a greater sense of the distinguishing grace and love of God to them, that God should from all eternity set his love on them, and make so great a difference between them and others who are of the same species with them, are no worse by nature than they, and have deserved no worse of God than they. When they shall look upon the misery of the damned, and consider how different their own state is from theirs, and that it is only free and sovereign grace that makes the difference, what a great sense will this give them of the wonderful grace of God to them! And how will it heighten their praises! With how much greater admiration and exultation of soul will they sing of the free and sovereign grace of God to them!

Men are under no natural necessity of being put to this use of glorifying God in their sufferings. God gives them opportunity of glorifying him in doing, in bringing forth fruit, puts them under advantages for it, and uses many means to bring them to it. But if they will not be useful this way, it is very just that God should make them useful in the only remaining way in which they can be useful, viz. in their destruction. God is not forward to put them to this use. He tells us, that he hath “no pleasure in the death of the wicked; but that the wicked turn from his way, and live;” Ezekiel xxxiii. 11. God represents the destruction of sinners as a work to which he is backward; yet it is meet that they should be destroyed, rather than that they should be suffered to frustrate God of the end of their being. Who can blame the husbandman for cutting down and burning a barren tree, after he hath digged about it, and dunged it, and used all proper means to make it fruitful?

From "The Future Punishment of the Wicked Unavoidable and Intolerable"

There is no long struggle, no fighting against the fire, no strength exerted to oppose the heat, or to fly from it; but it immediately stretches forth itself and yields; and the fire takes possession of it, and at once it becomes full of fire. Here is a little image of what you will be the subjects of in hell, except you repent and fly to Christ. However you may think that you will fortify yourselves, and bear as well as you can; the first moment you shall be cast into hell, all your strength will sink and be utterly abolished. To encourage yourselves, that you will set yourselves to bear hell torments as well as you can, is just as if a worm, that is about to be thrown into a glowing furnace, should swell and fortify itself and prepare itself to fight the flames.

From "The Justice of God in the Damnation of Sinners"

A crime is more or less heinous, according as we are under greater or less obligations to the contrary. This is self-evident; because it is herein that the criminalness or faultiness of any thing consists, that it is contrary to what we are obliged or bound to, or what ought to be in us. So the faultiness of one being hating another, is in proportion to his obligation to love him. The crime of one being despising and casting contempt on another, is proportionably more or less heinous, as he was under greater or less obligations to honour him.

But sinful men are full of sin; full of principles and acts of sin: their guilt is like great mountains, heaped one upon another, till the pile is grown up to heaven. They are totally corrupt, in every part, in all their faculties, and all the principles of their nature, their understandings, and wills; and in all their dispositions and affections. Their heads, their hearts, are totally depraved; all the members of their bodies are only instruments of sin; and all their senses, seeing, hearing, tasting, &c. are only inlets and outlets of sin, channels of corruption.

From "The Eternity of Hell's Torments"