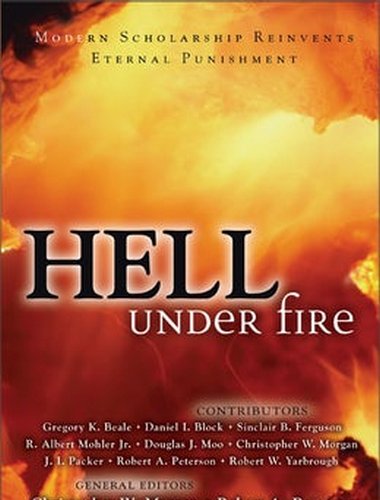 Thorough scholarship from some of the best theologians alive. Stand-out chapters begin with Mohler's opening historical survey, which is worth the price of the entire book on its own. Block's OT survey, and Morgan's chapter on images of hell are also exemplary. If the greatest criticism is the book's cover, it's very, very good.

Sin has been redefined as a lack of self-esteem rather than as an insult to the glory of God. Salvation has been reconceived as liberation from oppression, internal or external. The gospel becomes a means of release from bondage to bad habits rather than rescue from a sentence of eternity in hell.

The temptation to revise the doctrine of hell—to remove the sting and scandal of everlasting conscious punishment—is understandable. But it is also a major test of evangelical conviction. This is no theological trifle. As one observer has asked, “Could it be that the only result of attempts, however well-meaning, to air-condition Hell, is to ensure that more and more people wind up there?”

The chapter climaxes with the glorious picture of Yahweh displaying his glory and setting a sign (the cross!) among the nations, which rallies worshipers to find whatever means they can to bring their gifts and offerings to Zion. But when the worshipers leave the city, they pass by the city dump, where they observe the endless fire consuming the refuse and the maggots () ceaselessly eating away at the decaying corpses of those who have been unceremoniously dumped there—undoubtedly those whom Yahweh has slain in his fury (Isa. 66:16). The gaze of the worshipers has less to do with gloating over the deaths of their enemies than with recalling the fate that would have been theirs—but for the grace of God.

So hell as destruction is best understood to show that hell is final and utter loss, ruin, or waste. Destruction is a graphic picture that those in hell have failed to embrace the meaning of life and have wasted it. Trying to find life in themselves and sin, they have forfeited true life. Only ruin and garbage remains.

Whereas punishment stresses the active side of hell, banishment shows the horror of hell by highlighting what a person misses. When average evangelical church members are asked what hell is like, their likely response will be that hell is “separation from God.” While the idea of separation is certainly correct and included in this New Testament concept of banishment, separation alone does not do justice to the force of this picture of hell. Banishment is much stronger than separation. It suggests God’s active judgment while separation could simply imply divine passivity. Banishment also stresses the dreadfulness and finality of the predicament. The Scriptures demonstrate that Christ eternally excludes the unrighteous from the kingdom. The wicked never experience unhindered fellowship with God. They are forever banished from his majestic presence and completely miss out on the reason for their existence—to glorify and know their Creator.

God’s lordship in judgment means not only that he pronounces the sentence, but also that he rules over hell. Unfortunately, some have erred at this point. John Gerstner is an example when he writes, “Hell is where Satan rules…where his complete fury is unleashed.”6 Gerstner does not deny that God rules in hell but affirms that Satan also reigns there, under God. But this is erroneous, for hell is where God alone rules and where his complete fury is unleashed against Satan, his angels, and wicked human beings.

Passage after passage points to a holy and just God who gives sinners what they deserve. Judgment is according to deeds, or more precisely, according to thoughts (1 Cor. 4:5), words (Matt. 12:36), and deeds (Rev. 20:12-13). Those whose lives are characterized by evil thoughts, words, and deeds reap God’s wrath. When one inquires of the judgment passages why sinners end up in hell, Scripture repeatedly shouts the answer: corrupted human freedom and evil deeds.

Interestingly, John Wenham even suggested, “The ultimate horror of God’s universe is hell.”52 While hell indeed may in some sense rightly be seen as an awful reality, sin is actually the ultimate horror of God’s universe. Hell is merely the punishment. Sin is the crime. Which is worse, murder or the life sentence? Obviously, the crime is worse than the punishment. So often the contemporary conditionalists minimize the biblical teaching concerning retributive punishment, however, and replace it with a human-centered view. Yet the Bible is clear: Sin is inherently against God, who is infinite in all his perfections. Thus, sin is an infinite evil and merits endless punishment. So it is better to view hell not as a horror in God’s universe but as a demonstration of final and decisive justice in a universe once marred by sin.

But the coexistence of heaven and hell does not hinder the glorious victory of God or the utter happiness of the redeemed. Through punishing non-Christians eternally in hell, God will vindicate his majesty, display his power, glorify his justice, and indirectly magnify his grace.

A Christian, then, looks at life in the light of the destination to which it leads, and sees every person within that framework. Famous words penned around 1843 by the still young but soon-to-die Robert Murray M’Cheyne express well this view and its implications: “As I was walking in the fields, the thought came over me with almost overwhelming power, that every one of my flock must soon be in heaven or hell. Oh, how I wished that I had a tongue like thunder, that I might make all hear; or that I had a frame like iron, that I might visit every one, and say, ‘Escape for thy life!’”