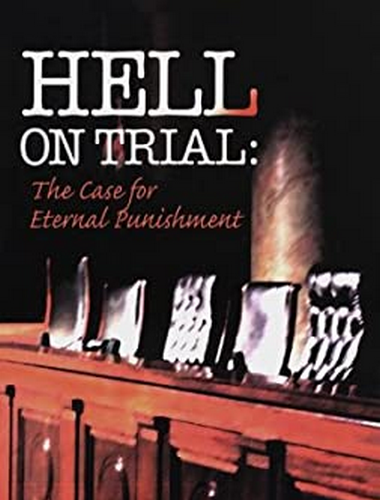 Robert Peterson has written what is in my estimation the greatest defense of the doctrine of hell. It is thorough, biblical, logical, and persuasive. There is good exegesis of the major passages on hell and refutations of both universalism and annihilationism.

ix foreword
A secularized faith is therefore not one marked by outright unbelief but rather one in which that belief has become tame and harmless.

I really do not think that a person with a proper degree of kindliness in his nature would have put fears and terrors of that sort into the world….I must say that I think all this doctrine, that hell-fire is a punishment for sin, is a doctrine of cruelty. It is a doctrine that put cruelty into the world and gave the world generations of cruel torture; and the Christ of the Gospels, if you take Him as His chroniclers represent Him, would certainly have to be considered partly responsible for that.

50
Upon reflection, however, we realize that the Redeemer paints such pictures out of kindness. By announcing the fate of the wicked before the Last Judgment, he affords them opportunity to escape that fate. In fact, all who heed his warnings, repent, and cast themselves upon his mercy will be delivered from hell.

55
Jesus speaks frequently of hell because he is the Savior of the world. He warns of unspeakable torment in order to move his hearers to flee from the wrath to come. We who name his name should not shrink from following his good example. We must tell people the truth: without Jesus as Lord and Savior they are headed for the eternal judgment of God.

57, quoting Leon Morris
We can understand that there are those who do not like the idea of hell. I do not like it myself.

64, quoting Larry Dixon
It was a teenagers sense of guilt-and rightfully deserved judgment in hell-but I’m not ashamed to acknowledge that the Holy Spirit used fear to bring me to Christ.

71
Some have been troubled that this verse may teach salvation by works. It does not. It teaches judgment based on works. The righteous will be rewarded with eternal life for the good they have done, and the good produced in them by “God who works in [his people] to will and to act according to his purpose” (Phil. 2:13). These good works are the fruit the Holy Spirit produces (Gal. 5:22-23) in those saved freely by God’s grace (Rom. 3:24).The resurrected wicked, however, will be condemned for the evil they have done. It is just of God to base his judgment of the unsaved on their deeds, rather than on whether or not they have heard the gospel. Though no one is saved apart from believing the gospel, it is fair for God to judge people according to their to their deeds. And the wicked get what they deserve for their evil deeds-damnation.

80
First, the expression “eternal destruction” seems an unlikely way to denote the obliteration of the wicked. If extinction were meant, why not just say “destruction”?

81, quoting J. I. Packer
“The subject of divine wrath has become taboo in modern society, and Christians by and large have accepted the taboo and conditioned themselves never to raise the matter.”

83
This passage shows the importance of the doctrine of hell to the early church. It was a part of the foundational teaching given to new converts. It was, therefore, considered basic to a Christian view of life.

87
The damned “will be tormented with burning sulfur” (Rev. 14:10; cf. Gen. 19:24). This refutes the annihilationists’ claim that the main purpose of fire in judgment is to destroy. To the contrary, it’s main purpose is to inflict pain, as this text shows. We need not, however, insist that there is literal fire in hell. “Such language… must be taken as symbolical of a fearful and final reality which no man can describe.”

89
As one who often struggles to submit to the challenges to God’s Word, I call on those Christians who espouse annihilationism to repent and give glory to God by submitting their minds to his truth.

99, quoting Tertullian
It would be most absurd if the flesh should be raised up and destined to the “killing of hell,” in order to be put an end to, when it might suffer such an annihilation (more directly) if not raised again at all. A pretty paradox, to be sure, that an essence must be refitted with life, in order that it may receive that annihilation which has already in fact accrued to it!

109, quoting Aquinas
The magnitude of the punishment matches the magnitude of the sin….Now a sin that is against God is infinite; the higher the person against whom it is committed, the graver the sin-it is more criminal to strike a head of state than a private citizen- and God is of infinite greatness. Therefore an infinite punishment is deserved for a sin committed against him.

109
The pains of hell involve both “the pain of loss” (poena damni) and “the pain of sense” (poena sensus). The former is the deprivation of the joyful vision of God, while the latter is the suffering of positive punishments in body and soul.

111, quoting Luther
Since God is a just Judge, we must love and laud His justice and thus rejoice in God even when He miserably destroys the wicked in body and soul; for in all this His high and inexpressible justice shines forth. And so even hell, no less than heaven, is full of God and the highest Good. For the justice of God is God himself; and God is the highest Good.

164
The Bible uses five main pictures to speak of hell: darkness and separation, fire, “weeping and gnashing of teeth,” punishment, and death and destruction.

179
I pray that God would spark a revival of the knowledge of the true doctrine of hell in the Christian church. I have no doubt that such a revival would result in gratitude for grace, amendment of life, and gathering of the lost such as we have not seen in our time. May God grant it!

187
God not only pronounces sentence, but he also reigns over hell. Unfortunately, some have missed this point. John Gerstner, for example, writes, “Hell is where Satan rules… where his complete fury is unleashed.” Gertsner doesn’t deny that God rules in hell. He says, however, that, under God, Satan also reigns there.

188
Jesus is a wonderful savior. He is also a terrible Judge. Think of it: the Savior of the world is also its Judge! He offers the free water of eternal life to everyone who believes that he is who he claims to be. Everyone who refuses to drink this water, however, “will drink of the wine of God’s fury, which has been poured full strength into the cup of his wrath” (Rev. 14:10).

201
First, studying hell increases my appreciation for the Savior’s sufferings.

206
Although it cuts across the grain of modern thinking, the Bible teaches that thanksgiving is due God for his wrath.

207
Studying God’s qualities helps us to view hell from an important perspective, that of God himself. God is majestic beyond all our imagining. He, therefore, deserves the eternal praise of every one of his creatures. Many human beings, however, refuse to bow before him as Lord, and because God is holy and righteous, he must punish their rebellion. Revelation, therefore, declares the wrath of almighty God against unrepentant sinners.

212
God will bring relief to his persecuted people and punish those who have persecuted them. This punishment is retributive: God “will pay back” the wicked with eternal ruin.

213, quoting Charles Spurgeon
When men talk of a little hell, it is because they think they only have a little sin, and they believe in a little Savior. But when you get a great sense of sin, you want a great Savior, and feel that if you do not have him, you will fall into a great destruction, and suffer a great punishment at the hands of the great God.