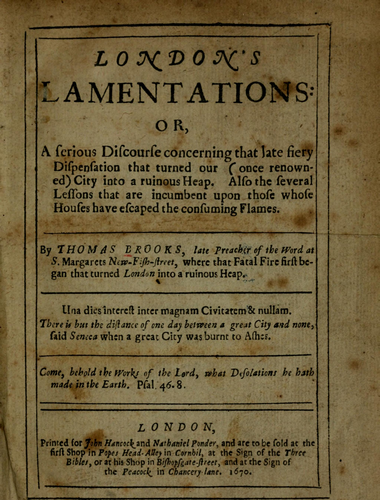 Although the scope of the material here (a response to the Great Fire of London in 1666) is wider than the doctrine of hell, what Brooks does say here about hell is virtually unrivalled in emotive power and insight. Brooks also models the application of the doctrine of hell to his contemporary context.

127
All the cruelties in the world cannot possibly make up any horror comparable to the horrors of hell. The brick-kilns of Egypt, the furnace of Babel, are but as the glowing sparkle, or as the blaze of a brush-faggot, to this tormenting Tophet that has been prepared of old to punish the bodies and souls of sinners with. Hanging, racking, burning, scourging, stoning, sawing asunder, flaying of the skin, &c., are not to be named in the day wherein the tortures of hell are spoken of. If all the pains, sorrows, miseries, and calamities that have been inflicted upon all the sons of men, since Adam fell in Paradise, should meet together and centre in one man, they would not so much as amount to one of the least of the pains of hell

129
The conclave of Rome, and the conclave of hell can do nothing without a commission from heaven. They cannot make a louse, nor burn a house, nor drown a pig, without a commission under the broad seal of heaven. A sparrow lights not upon the ground, nor a hair falls not from our heads, no, nor a bristle from a sow’s back, saith Tertullian, but by a divine providence. All created creatures, both in that upper and in this lower world, depend upon God for their being, motion, and several activities. Now in that God did not exert his power, neither to prevent nor check those furious flames, which he knew, without his interposure, would lay all in ashes; it is evident that it was his divine pleasure that London should be turned into a ruinous heap.

209
If after so many millions of years as there be drops in the ocean, there might be a deliverance out of hell, this would yield a little ease, a little comfort to the damned. Oh but this word eternity, eternity, eternity, this word everlasting, everlasting, everlasting, will even break the hearts of the damned in ten thousand pieces! There is scarce any pain or torment here on earth but there is ever some hope of ease, mitigation, or intermission, there is some hope of relief or delivery; but in hell the torments there are all easeless, remediless, and endless. Here if one fall into the fire, he may like a brand be pulled out of it and saved; but out of that fiery lake there is no redemption.