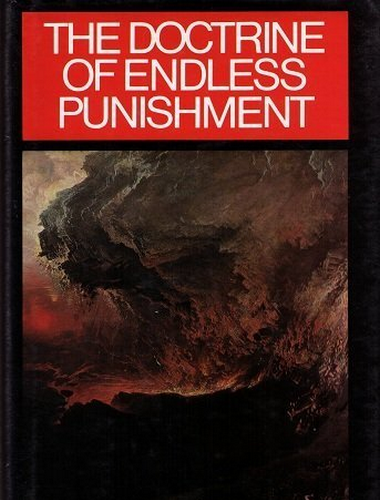 W. T. Shedd, one of my favorite theologians, has written a learned and excellent book on hell , incorporating his phenomenal grasp of the philosophers. Shame about the first part of the book, where he makes a number of exegetical missteps, as the second part is absolute dynamite.

v
The fall and eternal ruin of an immortal spirit is the most dreadful event conceivable. That some of God’s rational and self-determined creatures will forever be in deadly enmity to him, cannot be thought of without sorrow and awe. But from the nature of finite free will, it is a possibility; and it is revealed to us as a fact, as clearly as the facts of incarnation and redemption.

5
Suffering that is merely educational does not require a vicarious atonement in order to release from it. But suffering that is judicial and punitive can be released from the transgressor, only by being inflicted upon a substitute. He, therefore, who denies personal penalty must, logically, deny vicarious penalty. If the sinner himself is not obliged by justice to suffer in order to satisfy the law he has violated, then, certainly, no one needs suffer for him for this purpose.

42
Plato (Gorgias, 235) describes this class of transgressors as “forever (τὸν ἀεὶ χρόνον) enduring the most terrible, and painful sufferings.” It is noteworthy, that the place in which they suffer is denominated Hades, by both Homer and Plato—showing that in the classical use, Hades is sometimes the equivalent of Tartarus and the modern Hell, and the contrary of Elysium.

135
But the Divine tribunal, in the last great day, is invariably and exactly just, because it is neither reformatory, nor protective. In eternity, the sinner is so hardened as to be incorrigible, and heaven is impregnable. Hell, therefore, is not a penitentiary. It is righteous retribution, pure and simple, unmodified by considerations either of utility to the criminal, or of safety to the universe. In the day of final account, penalty will not be unjustly mild for the sake of the transgressor, nor unjustly severe for the sake of society.

142-143
Consequently, the great and distinguishing element in hell-torment is despair, a feeling that is impossible in any man or fallen angel who knows that he is finally to be happy forever. Despair results from the endlessness of retribution. No endlessness, no despair. Natural religion, as well as revealed, teaches the despair of some men in the future life. Plato (Gorgias 525), Pindar (Olympia II.), Plutarch (De sera vindicta), describe the punishment of the incorrigibly wicked as eternal and hopeless.

152
3. In the third place, endless punishment is rational, because sin is an infinite evil; infinite not because committed by an infinite being, but against one. We reason invariably upon this principle. To torture a dumb beast is a crime; to torture a man is a greater crime. To steal from one’s own mother is more heinous than to steal from a fellow citizen. The person who transgresses is the same in each instance; but the different worth and dignity of the objects upon whom his action terminates makes the difference in the gravity of the two offences.

161
Founded in ethics, in law, and in judicial reason, as well as unquestionably taught by the Author of Christianity, it is no wonder that the doctrine of Eternal Retribution, in spite of selfish prejudices and appeals to human sentiment, has always been a belief of Christendom. From theology and philosophy it has passed into human literature, and is wrought into its finest structures. It makes the solemn substance of the Iliad and the Greek Drama. It pours a sombre light into the brightness and grace of the Æneid. It is the theme of the Inferno, and is presupposed by both of the other parts of the Divine Comedy. The epic of Milton derives from it its awful grandeur. And the greatest of the Shakespearean tragedies sound and stir the depths of the human soul, by their delineation of guilt intrinsic and eternal.