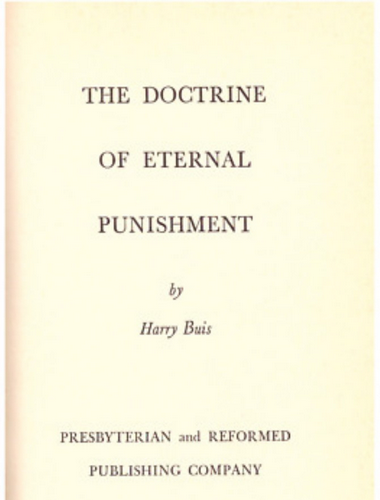 Excellent, medium-length book which surveys both the historical and biblical doctrine of hell with breadth. Not much new here, but a solid resource.

Preface
This book is not written because the author takes delight in the subject. The thought of hell terrifies. It ought to make us all shudder. But it is a fact taught in God's Word. To deny or to ignore any Scriptural teaching is a serious matter. . . We have been led to a serious study of this subject for several reasons. One is that there is no other doctrine that is clearly taught in Scripture which is so generally denied or ignored in our modern theological world.
38
In his pronouncement against Judas, Jesus describes the punishment of the wicked by means of another comparison. "The Son of man goeth, even as it is written of him; but woe unto the man through whom the Son of man is betrayed: it were better for that man if had never been born" (Matthew 26:24). According to this passage the fate of Judas will be far worse than annihilation.
p43
The teachings of our Savior may be summarized as follows: There are only two ultimate destinies, heaven and hell. The existence of the wicked in the future state is a very terrible reality and endless. Part of the punishment lies in exclusion from the presence of Jesus himself. There are degrees of punishment depending upon the kind of life lived on this earth, and upon the greatness of the opportunities which were neglected.
p53
The masses of Christians in the early Church certainly believed in the doctrine of eternal punishment. Gibbon considered this to be one of the five most important reasons why the Gospel spread in such amazing fashion.
p100
John Charles Ryle (1816-1900), Bishop of Liverpool, certainly believed in it. He said, "Let others hold their peace about hell if they will — I dare not do so. I see it plainly in Scripture, and I must speak of it. I fear that thousands are on that broad road that leads to it, and I would fain arouse them to a sense of the peril before them. What would you say of the man who saw his neighbor's house in danger of being burned down, and never raise the cry 'Fire'? Call it bad taste, if you like, to speak of hell. Call it charity to make things pleasant and speak smoothly, and soothe men with a constant lullaby of peace. From such notions of taste and charity may I ever be delivered. My notion of charity is to warn men plainly of their danger. My notion of taste is to declare all the counsel of God. If I never spoke of hell, I should think I had kept back something that was profitable, and should look on myself as an accomplice of the devil."
p116-117
A Just God Would Not Give Infinite Punishment for Finite Sin.
This is a very popular argument of the universalist. To this it may be replied: Sin against God is a very serious matter. As Shedd so well explains: "Those who deny the position that sin is an infinite evil forget that the principle, upon which it rests is one of the commonplaces of jurisprudence: the principle, namely, that crime depends upon the object against whom it is committed as well as upon the subject who commits it. The merely subjective reference of an act is not sufficient to determine whether it is a crime. The act may have been the voluntary act of a person, but unless it is also an offence against another person, it is no crime. To strike is a voluntary act; but to strike a post or a stone is not a culpable act. Furthermore, not only crime, but degrees of crime depend upon the objective reference of a personal act. Estimated only by the subjective reference, there can be not only no culpability, but no difference in culpability. Killing a dog is no worse than killing a man, if merely the subject who kills, and not the object killed, is considered. Both alike are voluntary acts, and of one and the same person. If therefore the gravity of the act is to be measured solely by the nature of the person committing it, and not by that of the thing against whom it is committed, killing a dog is as heinous as killing a man.
p127
It is no coincidence that our present age which laughs at the idea of hell is an age of gross immorality. As Sheila Kaye-Smith says, "Every significant religious revival has been accompanied by a quickening sense of the danger and terror of hell."
Tagged 20th Century.