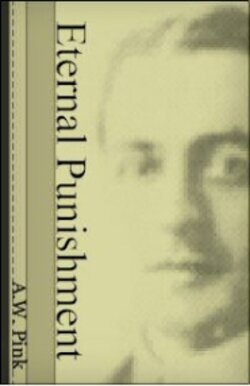 An extremely short but solid work from a renowned theologian.

Forward
The subject before us is one that needs stressing in these days. The great majority of our pulpits are silent upon it, and the fact that it has so little place in modern preaching is one of the signs of the times, one of the many evidences that the Apostasy must be near at hand.

25
Not only will the lost be tormented in flames, but their anguish will be immeasurably increased by a sight of the redeemed being “comforted.” Then shall they see the happy portion of the blest which they despised, preferring as they did the pleasures of sin for a season. And how the retention of “memory” will further augment their sufferings!

31
That God shall punish every rebel against Himself is required by the very perfections of His high sovereignty. It is but meet that He should display His governmental supremacy. The creature has dared to assert its independency: the subject has risen up in arms against his King; therefore, the right of God’s throne must be vindicated—“I know that the Lord is greater than all gods: for in the thing wherein they dealt proudly He is above them” (Ex. 18:11). When Pharaoh dared to pit himself against Jehovah, God manifested His authority by destroying him at the Red Sea. Another king He turned into a beast*, to make him know that the Most High ruleth in the kingdom of men. So, when the history of this world is wound up, God will make a full and final manifestation of His sovereign majesty.

33
Think it not strange that God should deal so severely with you, or that the wrath you shall suffer shall be so great. For great as it is, it is no greater than the mercy which you now despise. The love of God, His marvellous grace in sending His own Son to die for sinners, is every whit as great and wonderful as this inexpressible wrath. You have refused to accept Christ as the Saviour from the wrath to come, you have despised God’s dying love, why then should you not suffer wrath as great as that grace and love which you have rejected? Does it still seem incredible that God should so harden His heart against a poor sinner as to bear down upon him with infinite power and merciless wrath?