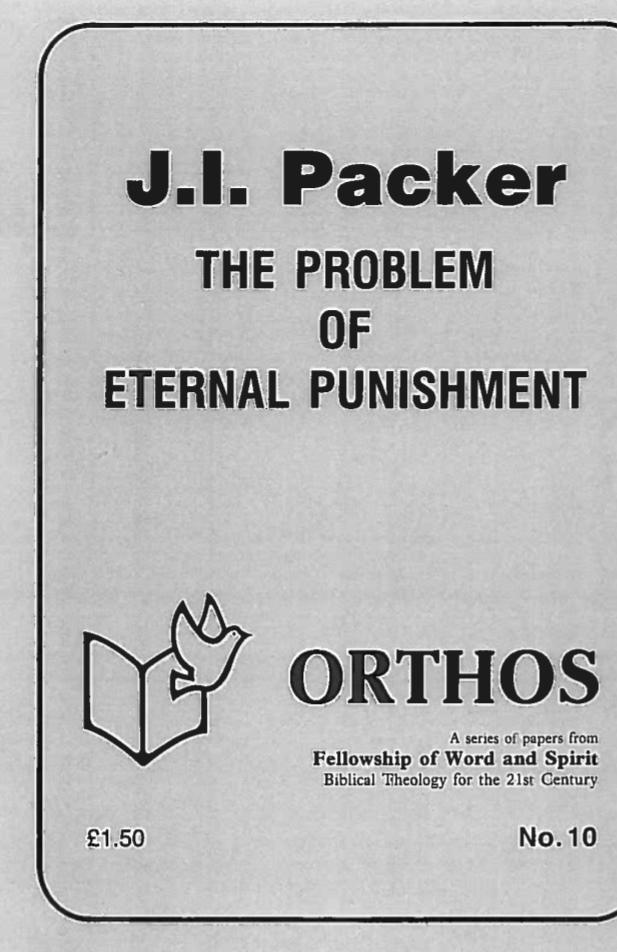 Packer draws from a deep well and there are some significant insights here but unfortunately he gets a few too many things wrong. This is especially fascinating in light of the many forewords and recommendations he has given to book on hell from a traditional perspective.

13
It rudely disrupts the sort of peace of mind that we in the Western world cultivate today – the peace of mind, that is, that is gained by constantly telling oneself that there is nothing to worry about, and everything will work out all right in the end. But since this complacency is part of our culture, and is sniffed like glue in the air we breathe, and does in fact operate as a deadening drug on the mind, it is a kind of knee-jerk reaction with us to resent having it disturbed, and hence to dismiss the doctrine of eternal punishment in all its forms as debased Christianity. We scoff at hell fire as a bad dream, the murky stamping-ground of redneck fundamentalists, backwoods preachers, and oldfashioned Roman Catholics. For ourselves, we write off the idea as a hangover from primitive ages now long past, and when we meet someone who still believes in eternal punishment we regard him as at least quaint, and perhaps weird; we certainly do not take him seriously.

15
Moreover, ‘endorse’ is hardly the right word; for in using these ideas Jesus and the apostles purged them of the overtones of gloating that they had often carried before and imparted to them a nuance, or temper, or feeling-tone of what I can only call traumatic awe: a passionate gladness that justice will be done for God’s glory, linked with an equally passionate sadness that fellow human beings, no matter how perverse, will thereby be ruined.

16
By the same token, I do not propose at any point to use the word ‘torment’, scriptural though it is (see the story of Dives and Lazarus: Lk. 16:23, 28) for describing the state of the ungodly beyond this world. Its vibrations, too, are bad: to the modern mind, it suggests sadism and cruelty and torture, and what we are talking about is none of these things, but the adorable justice of a holy Creator who deals righteously with people according to their works.

18
Second, it is said that everlasting retribution would be needless cruelty, since God’s justice does not appear to require it. Reverence, I think, will leave it to God to know that His justice requires a means to his own fullest glory; but I would point out that this argument, if it proves anything, proves too much. For if it is needlessly cruel for God to keep the lost in being after judgment, no reason can be given why it is not needlessly cruel for him to keep the lost in the conscious misery of the interim state (which Jesus’ story of Dives shows that he does, Lk. 16:23 ff.), and then to raise them bodily in what Jesus calls ‘the resurrection of judgment’ On. 5:28). What God ought to do, on conditionalist principles, is annihilate unbelievers at death – but, as biblical conditionalists confess, he does not do this. So the conditionalist argument, which sought to clear God of the suspicion of needless cruelty, actually puts him under it.

18
Fourth, it is said that the joy of heaven will be marred by knowledge that some continue under merited retribution. But this cannot be said of God, as if the expressing of his holiness in retribution hurts him more than it hurts the offenders; and since in heaven Christians will be like God in character, loving what he loves and taking joy in all his self manifestation, including his justice, there is no reason to think that their joy will be impaired in this way.

18
One final admonition. Do not speculate about the retributive process. Do not try to imagine what it is like to be in hell. The horrific imaginings of the past were hardly helpful, and often in fact proved a stumbling-block, as people equated the reality of hell with the lurid word-pictures drawn by Dante, or Edwards, or C. H. Spurgeon. Not that these men were wrong to draw their pictures, any more than Jesus was wrong to dwell on the fire and the worm; the mistake is to take such pictures as physical descriptions, when in fact they are imagery symbolizing realities of possible experience of which we can only say they are far, far worse than the symbols themselves.